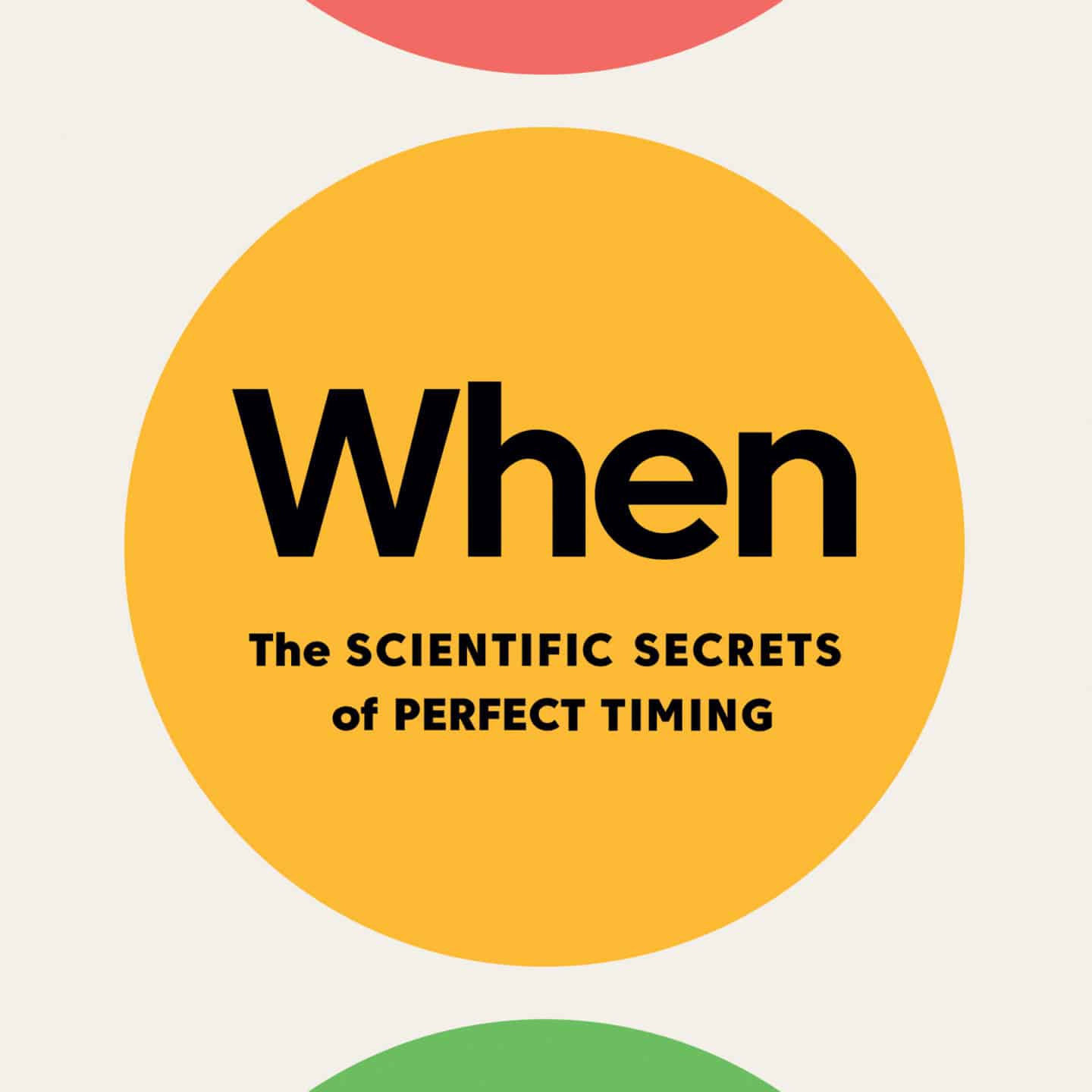 Daniel Pink explores how to become the master of your when. We assume that timing is an art. In When: The Scientific Secrets of Perfect Timing, Pink shows that timing is a science.

He starts this book by describing the fluctuations of our mood during the day. There is a peak, a trough, and a rebound. In the peaks—which for most of us is in the morning—we are at our sharpest. This is when analytical work is best. During this peak, we’re better at analytic work, work that requires heads-down focus, vigilance, attention, batting away distractions – auditing a financial statement, writing a legal brief. Then a trough follows lunch. This is the time to focus on administrative tasks. In the recovery phase, in the late afternoon, we are open to insights involving abstract ideas. This is the time for creative things because we’re in a slightly better mood, but we’re less inhibited. Then our spirits rise again in the evening after work.

There is an exception to this rule, and that is our friends who are “owls.” Those of us who are strong night owls go in the reverse order.  To determine where you fall on the lark-owl chronotype scale, find out the midpoint between when you wake up and when you go to bed. Or you can take this quiz to find out where you land on the scale.

Surgery errors occur much more often in the afternoon. So do parole revocations in front of a judge. If you can avoid matters that require analytical thought in the afternoon, then do it.

How do you start your day? Pink’s research suggests you should get as much sunlight as possible the first thing in the morning, as this is a signal to your body to stop producing sleep hormones and start creating alertness. You should not drink caffeine immediately after you wake up in the morning because it interferes with the production of cortisol. Instead, drink a glass of water to re-hydrate. Drink coffee 60-90 minutes after waking up. In the afternoon, at 2:00 pm to 4:00 pm., drink coffee again.

How do you avoid false starts? Instead of a post-mortem performed when the patient is already dead, it is best to start with a “premortem.” By imagining failure before it happens, we anticipate some of the problems to avoid before the project begins. So before the start of a project, ask your team, “What went wrong?” by assuming it is 18 months from now, and this project was a disaster.

When to Go First?

When NOT to go first?

You need a break.

Breaks are the answer. The most productive people work for 52 minutes straight, then take a 17-minute break. Pink suggests adding breaks to your calendar, just like any other meeting. Professionals take breaks, amateurs don’t.

Ideal Breaks. The perfect break is moving, with a colleague, outside, and entirely detached from discussing work. The best break is a “nappuccino.” It is a cup of coffee followed by a 10-to-20-minute nap. That time avoids sleep inertia that makes you tired after longer naps. You feel refreshed. Drink coffee before the rest, and the caffeine will kick in 25 minutes later. The best time for your nap is seven hours after waking up. That’s because our worst decisions are made at that time.

Eat. Lunch, not breakfast, is the most important meal of the day. Great lunches have two elements — autonomy and detachment. You must have the opportunity to exercise control over what you do, how you do it, and who you do it with. And you must be detached from work so that you can refocus after lunch. This means staying off your phone.

Timers. Before you start a task, set a timer. Every 20 minutes, look at something 20 feet away for 20 seconds. If you are working at a computer, this short break will rest your eyes and improve posture, thereby fighting fatigue. Pink calls this the 20-20-20 rule.

Move. Stand up for a minute, shake your arms and legs, flex your muscles, rotate your core, and then sit back down.

Sometimes midpoints stall us; other times, they motivate us. Pink outlines how to use the middle to create a spark instead of a slump.

Midlife crises are real. Happiness climbs into early adulthood, and then starts a downward trend in the late thirties, with a low in the fifties. Then people quickly recover from that slump with happiness later in life higher than it has ever been.

When you’re in the middle, publicly commit to your goals. If you’re writing, stop a sentence halfway through it because it will help you begin the next time that you pick it up. Print out a calendar and mark off every day that you’re working towards your goal. With that physical reminder, it will motivate you not to break the chain of the days in the middle.

Be aware that every story has a middle. Don’t let it be invisible. Use the center to wake up rather than rollover. At that midpoint, imagine you are behind, but only by a little bit. And picture one person that will benefit from your efforts in the middle of a challenging project, and it will deepen your dedication to the work.

We want endings that are poignant, not happy. Good endings discard what we wanted and give us what we need. In fact, adding a small amount of sadness to an otherwise happy moment elevates that moment rather than diminishing it.

Endings of all types shape our behavior in four ways: by energizing, editing, encoding, and elevating. This is why someone who is 49 is four times more likely to run a marathon than someone who is just one year older. At the start of something, we are energized by how far we have progressed. And at the end, we are excited by the small gap remaining. The most intense moment, the peak is what we remember. But we also remember the ending.

At the end of each workday, take the last five minutes to bring the day to a poignant close. During the first two minutes, write down what you accomplished since the morning. During the next two minutes, make your plan for tomorrow. And use that last minute to send anyone a thank you email.

I used to believe in the value of happy endings. Now I think that the power of endings rests not in their unmitigated sunniness but in their poignancy and meaning.

When is a compelling book with a lot of insight and practical ideas. But it did not keep me as interested as other books by this same author. Ironically, it does not have the unique special ending that he advocates in this book. It just ends. You will learn a lot in this book. But it is longer than it should be. I give it four out of five hammers!