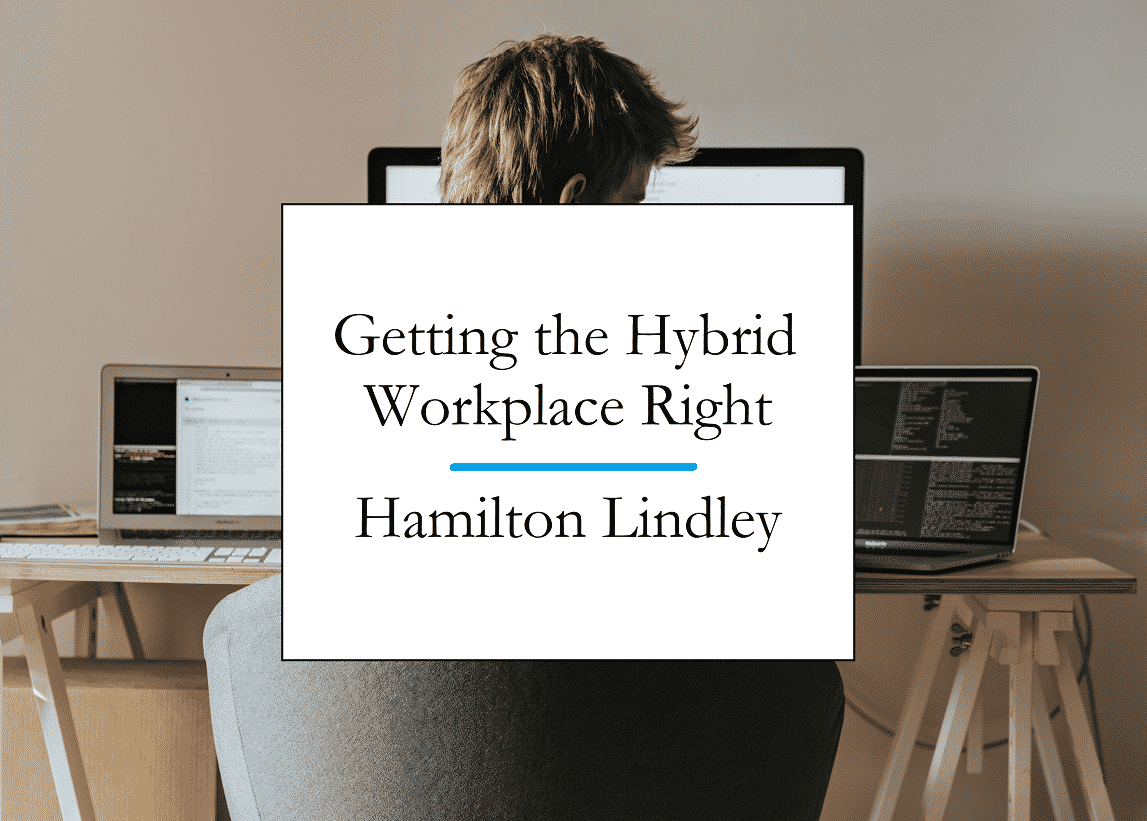 Businesses are finally making the transition to a truly hybrid work approach after several false starts. There are a variety of opinions on what this next cycle will include, just as there have been at every major turning point in the last two years. While some businesses are pushing for an office return like Covid never happened, others are going all-in on flexible work environments.

Despite this range of opinions, every leader is grappling with the same question: Is the heavy focus on flexibility and well-being a passing trend or the start of a new normal?

Researchers found that the last two years had left an unforgettable impact on workers’ minds, affecting their expectations and profoundly changing the way we work. Three or six months of remote work could have been written off as a hiccup, but the length of our collective experience means there’s no turning back.

This is a key moment in history, and leadership is more significant than ever. Those that adopt a new mentality and change cultural norms will best position their employees and businesses for long-term success. Adapting to the rapid pace of change in the corporate world is no simple task. Analysis by Microsoft identifies five significant themes that will assist leaders in empowering their teams to succeed in the next year.

When it comes to work and life, employees have varied priorities.

Employees are recalibrating what they want from work. When compared to before the epidemic, 47% of employees choose to prioritize family and personal life above work. And 53% are more inclined to put their health and well-being first, with this number rising to 55% for parents and 56% for women.

The Great Reshuffle is far from done. Mental health, work-life balance, well-being, and a lack of flexible work hours are major reasons that 52 percent of workers are considering changing employers this year. That is up three percent from last year. Eighteen percent of all respondents abandoned their job in the last 12 months.

When asked what they desired most from a new job, good culture ranked number one (46 percent), followed by well-being perks (42 percent), a feeling of purpose and meaning (40 percent), flexible hours (38 percent), and more than two weeks’ vacation time (35 percent).

Adapting to these new expectations is not just beneficial for individuals. It can also be a competitive advantage for businesses, allowing them to empower current staff while also attracting new talent.

Managers are caught between the demands of their bosses and the expectations of their employees.

Managers play a vital role because they are closest to the specific demands of employees. But they are caught between new employee expectations and leadership decisions. Half of the managers polled (54%) believe their bosses are out of touch with their workers.

For example, according to a 2021 survey, 73 percent of workers seek flexible work alternatives to stay with the company in the long run. However, this year, half of CEOs say they either demand or plan to require staff to work full-time in the office.

Employees who have worked remotely or in a hybrid environment for more than two years believe they have not only survived but excelled at it. Eighty percent say their production has remained constant or improved, compared to 54 percent of company owners who believe their team has been less productive since implementing remote or hybrid work.

Managers are in a unique position to notice and comprehend all sides of the situation, but that knowledge is useless if they aren’t given the authority to act. There’s a vacuum that needs to be filled, with 74% of managers admitting they don’t have the authority or resources required to make changes for their staff.

We used to associate work with the office, but now that we’ve established that we can work from anywhere, what function does the office play?

Many companies have made it apparent that they want their employees to return, but the why has been unclear. If leaders don’t do this properly, employees may abandon the hybrid concept entirely.

Fifty-one percent of employees who presently work in a hybrid arrangement say they plan to go completely remote in the coming year. They don’t appear sure that hybrid can work for them after a year of an almost-hybrid approach. About 38% of employees report that they don’t understand why or when they should come to the office. And only 28% of them have a team agreement that addresses those essential concerns.

Bringing people into the office isn’t enough. It’s also about maximizing their time, particularly in hybrid meetings. Although 44% of hybrid employees and 43% of remote participants say they don’t feel included in meetings, just 27% of companies have adopted new hybrid meeting etiquette to guarantee everyone feels included and involved.

Leaders must be strategic about the who, where, and why of in-person gatherings and establish new meeting etiquette that allows everyone a place at the table to make the office worth the journey and create an engaging experience for everyone.

Flexible work does not have to equal “always on.”

Since early 2020, many of us have felt like we’ve been working harder than ever, and data backs us up. We’ve found a constant increase in the average workday duration (+13 percent), after-hours and weekend work (+28 percent, +14 percent, respectively), time in meetings (+252 percent), and chats sent (+32 percent). That’s a rising tide that can’t last forever.

But there are positive signs that employees are restructuring their workdays and being more deliberate with their time. Meetings start later on Mondays and end earlier on Fridays than last year, and fewer meetings take place during the lunch hour. Ten percent more workers are taking vacations. Employees are also rediscovering the benefits of brief hallway chats. While this is proof of individual attempts to maintain balance, teams must adopt new standards that set boundaries to ensure that one person’s flexibility does not become another’s “always on.”

In a hybrid world, rebuilding social capital takes on a new meaning.

We’ve all noticed how remote work affects our workplace connections, and our research backs it up. While 58 percent of hybrid employees have maintained successful connections with their direct teams over the previous year, just half of the exclusively remote employees can claim the same, and even fewer (42 percent) have a solid relationship with others outside of their immediate team. Newly hired workers also stand out as a group that may require further assistance: they have poorer workplace connections, and 56% indicate they would consider leaving employment in the coming year.

Returning to the workplace cannot be the exclusive way to reclaim the social capital lost over the last two years. Workers may reclaim lost ground by making time and space for relationship development and encouraging teams (especially remote and new employees) to emphasize networking and in-person engagement.

People who return to work in March 2022 are not the same as those who left in March 2020. Their expectations have shifted. These two years have left an indelible mark on the workplace. Businesses that adapt and embrace new ways of thinking and working will be a competitive advantage that propels businesses forward.