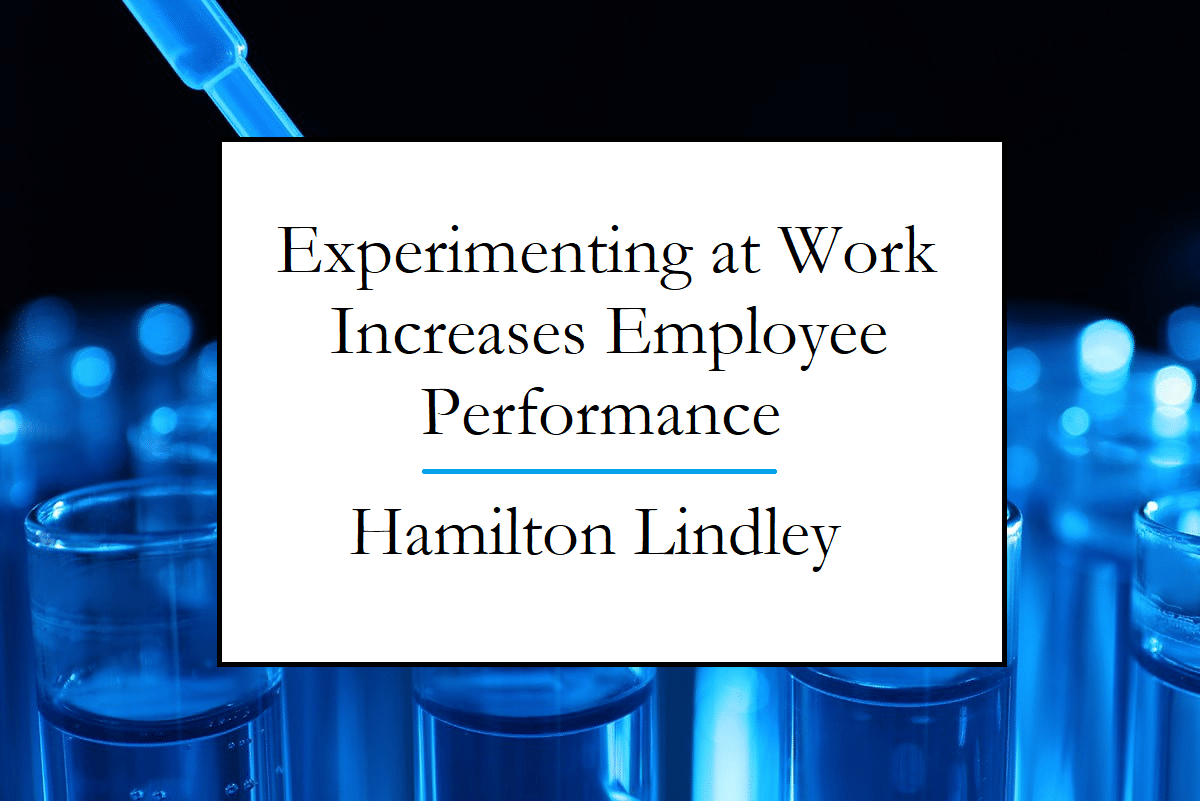 Marc and Al invented a trendy new textured wallpaper. But their efforts were a total failure. Nobody wanted that wallpaper. Then they tried to use the wallpaper as housing insulation. That too was a flop. Then they had the opportunity to use it to wrap a newly launched computer during transport. Today, few people even know that bubble wrap started as a miserable failure. We would never know the satisfying sound of a bubble wrap pop if they stopped experimenting.

According to new research, allowing experiments at work increases performance and productivity. Experimentation creates a gigantic boost in motivation. The study of more than 20,000 workers shows that leaders must ensure that their team members are not focused only on tasks. Instead, work must also be concentrated on problem-solving.

Researchers from Harvard Business School discovered that employees who were required to work from home were the least motivated of all workers. Not having a choice drastically affects worker’s morale. So leaders must ensure that weekly cycles include an emphasis on experimentation, especially those who work from home.

The motive that boosts performance the most is play. When work involves a series of bureaucratic minutiae, it obliterates the ease of making decisions. Working from home makes the satisfaction of problem-solving with a co-worker difficult. It is also difficult for employees to find purpose when their colleagues aren’t present to remind them. Worker’s potential decreases when they cannot get access to workers who can develop and teach others to improve creativity, adaptability, and quality.

Allowing your team members the opportunity to experiment is a powerful way to increase their motivation. People want to solve problems that matter. If areas of improvement aren’t obvious, ask your team questions like:

What makes teams thrive is when every person feels like they have a challenge that they can solve. It is usually a small task instead of programs that need the CEO’s permission.

Leaders should make sure that part of their team members’ week focuses on problem-solving instead of tactical work like the tickets to answer or boxes to check. For example, at the start of the week, hold a meeting where you ask the following questions of the group:

At the end of the week, concentrate on reflection. Collect data on the week’s experiments. Ask people how they are feeling–where did they struggle and where did they flourish?

Performing many experiments means you will see some ideas flourish while plenty of others fail. Failure is an inescapable facet of an experimentation culture. Without failing at some projects, you will never be able to accomplish that one fantastic idea that helps your organization become competitive.

If your employees aren’t comfortable with failure, you won’t be able to create a culture of experimentation. Employees will never become comfortable with failure if their leader isn’t. So share your failures with your team, not just your successes. Leaders who are confident to share their failures will create a place where employees can do the same. A corporate culture where failing is expected has a better long-term future than a culture that ignores them.

As CEO of Amazon, Jeff Bezos wrote that “As a company grows, everything needs to scale, including the size of your failed experiments. If the size of your failures isn’t growing, you’re not going to be inventing at a size that can actually move the needle.” When the company’s Amazon Fire smartphone flopped, he told the developer not to lose a moment of sleep over the company losing $170 million. That phone’s technology eventually led to Amazon’s Alexa technology. Today, Alexa enjoys a 70% market share and has sold more than 200 million units. Success was born from failure.

Productive employees are vital for companies that seek to continue competing. There are many ways to nurture a positive culture where employees are motivated. Experiments will lead to higher employee motivation and productivity. Motivating employees doesn’t require a large budget. Instead, it requires thinking differently about the issues facing your business. Find ways to experiment so that you can spark the curiosity of your workers.