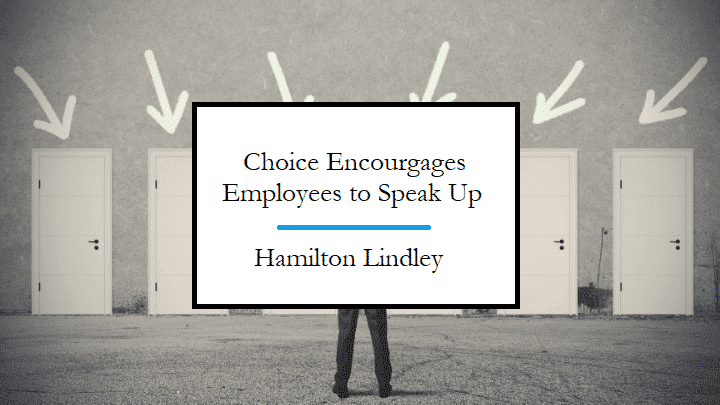 Korean Air had more plane crashes than nearly any other airline in the world. You may think they had old planes or poorly trained pilots. But that wasn’t the case. Instead, they had a cultural legacy–Korean culture is hierarchical. You are required to be submissive to your elders and superiors in a way that Americans wouldn’t recognize. Because cultural mandates required co-pilots to defer to their captains, they didn’t speak up at work. The results were deadly.

Empowering employees to discuss their ideas helps companies innovate and reveal weaknesses. But that does not seem to turn into action. More than 85% of employees stay quiet on important topics because they worry about negative effects of speaking up. So how can supervisors encourage workers to express their ideas?

Workers’ likelihood to express ideas is influenced both by the corporate culture and individual personalities. A good corporate culture can override the notable role that personality brings in expressing opinions. So a vital part of spurring employees’ ideas is to create a culture where it’s essential to speak up.

Research shows that emphasizing choice will encourage employees to express their voice. When we have choices, we feel in control of our environment. Feeling in control is a fundamental prerequisite to greater belonging and ownership at work. Employees are more likely to share their opinions where companies affirmed that people always have a choice.

Researchers asked people with jobs to roleplay as job applicants. They presented them with two advertisements for jobs, one that emphasized choice and one that did not. The company brochure focusing on choice mentioned:

Here at the [company name], we must remind ourselves that we always have a choice. Whether it is about expanding to new markets, launching a new product, or changing the way we do business, we always have a choice … In a nutshell, instead of accepting the circumstances as inevitable, our employees make choices that help us thrive in the marketplace.

The other company brochure did not mention the idea of choice.

The results showed that participants were more willing to share their ideas, opinions, and thoughts in the company that featured the availability of choice as an essential part of its culture. People were also more interested in working for the company that emphasized choice than the organization that did not. Highlighting choices will give you an edge in recruitment in addition to enabling your company to promote employee engagement.

People feel stronger when they are thinking about the ability to choose. The act of choosing enables workers to control their environment while expressing their opinions, preferences, and feelings.

Simply choosing which projects to concentrate on, which emails to reply to first, and which conferences to attend, employees not only express their priorities and goals, but they also determine what gets done (and what gets left behind). So when company cultures emphasize choice, people will speak up because doing that bolsters their perception of themselves as independent, strong people who develop their own futures and impact the world around them.

Although choice is good, too many options can be overwhelming. That can offset the empowerment that choice can bring. But businesses can work to design a culture that stresses the notion of choice without overwhelming workers with hundreds of choices.

Overall, if businesses want to support their workers to exercise their opinions, they need to design an atmosphere that encourages participation. Research recognizes a simple but practical trait of corporate culture — highlighting the importance of choice — that can help supervisors and companies do just that.