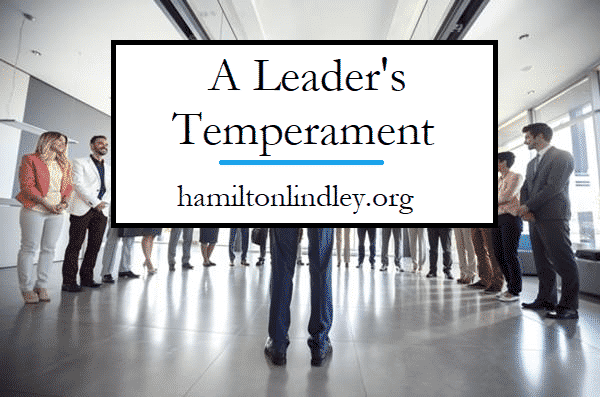 Nolan is a cornerback for the Philadelphia Eagles. The highpoint of his position is sacking the quarterback. That’s because it creates a psychological change in the quarterback. It makes him angry. We know that anger causes tunnel vision. It narrows your senses and significantly erodes your ability to make intelligent decisions.

At the snap against the Indianapolis Colts, Nolan clears the offensive line and smacks the quarterback on the ground with the crack of plastic and the force of hundreds of pounds. He just crushed his opponent. But the quarterback, Andrew Luck, enthusiastically congratulates Nolan.

“That was a great hit, man! You’ve been watching film and studying us well. Good job!”

Andrew unnerves critics and rattles other team’s players by keeping his temper when others lose their own. The best leaders look at tense situations as if they were observers who are removed in time. They see their interests and those of their critics, and because it doesn’t feel personal, they react as calmly as actors on a stage. Attack these leaders, and they smile.

How to be calm when facing failure

It feels like we were slammed by a defensive lineman when a work catastrophe happens. An employee missed a deadline, lost the company money, or poisoned a significant relationship. When that happens, employ three techniques: (1) Listen politely, (2) don’t get defensive, and (3) ask for time before responding. That three-part strategy allows for a calmer and more thoughtful response. It’s not easy to do without training because people are creatures of habit. But techniques can take you only so far.

Good leaders encourage a culture where every team member’s ideas are understood and appreciated. When leaders have a good temperament, it creates a culture that increases upward communication (being open to ideas from all sources); establishing stretch goals (keeping an open mind to find effective ways to reach organizational goals); and stresses speed (defined as promoting ideas to be tested first and discussed — and plucked apart — later). This doesn’t happen when a leader displays a bad temper.

What is the cause of anger at work?

Analysts say that anger is a secondary emotion that covers up anxieties, fears, or worries. Hysterical eruptions in the workplace are never proper because emotions drive responses when we need thoughtful logical reactions. What is making you anxious or fearful? It’s likely a perception that you lack control. You may feel incompetent. Negative thoughts grow, producing a negative opinion revealed through aggression. That leads to a problem where emotions drive performance.

But Steve Jobs was a jerk!

Steve Jobs was a jerk. That’s what got him fired from Apple. In exile, he learned how to control his temper and saw the benefits of a collaborative culture when he worked at Pixar. He brought that collaborative style back when he was rehired by the company he founded. If Steve Jobs had failed to evolve as a person, we would not have smartphones. Jobs’ executive team repeatedly steered him away from trouble and in the right direction. He was a legend because he learned how to control his temper.

What types of temperament do most entrepreneurs have?

Entrepreneurial leaders are more likely to be open to experience, more conscientious, similar for extraversion, less agreeable, and less neurotic. Entrepreneurs are reliably more open to understanding. It seems like an entrepreneur is probably energized by new challenges and quickly changing work environments. Individuals who thrive on challenges and novel environments present creative solutions, business models, and products, and the openness of entrepreneurs may aid these functions. Leaders have higher conscientiousness, which is a measurement of dependability and achievement. Also, entrepreneurial leaders have modestly smaller amounts of agreeableness and neuroticism.

How do I stop losing my temper at work?

An impulsive response never solves a dilemma. You will likely make the situation worse. Once something comes out of your mouth, it is like toothpaste out of a tube. You can’t force it back in. Saying hurtful things is dangerous to your professional reputation. It shatters your credibility. When a conversation has gotten out of hand, tell the other person that you will have this conversation another time.