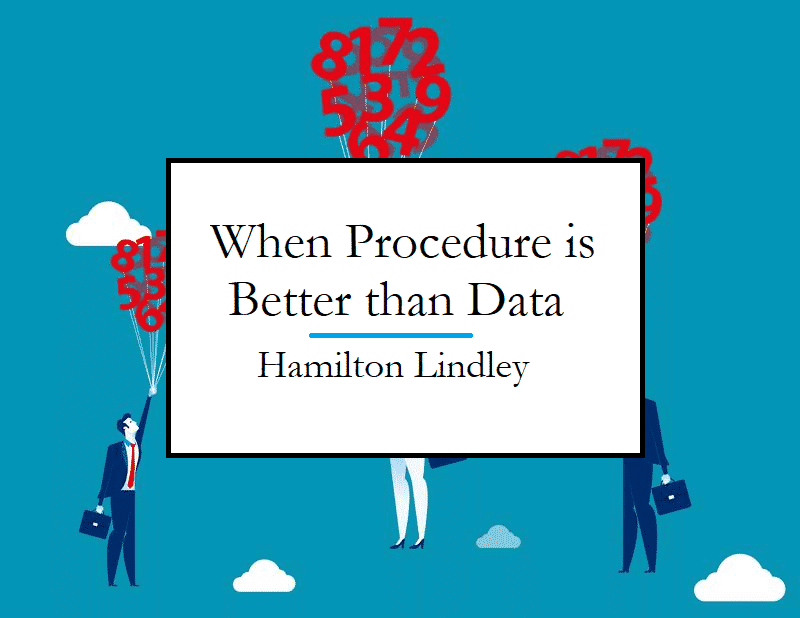 I am a data geek. I love it because data is objective, free from individual influence. Two plus two is four. I can’t just tell you that it’s nine. You wouldn’t believe me. You’re no fool. But what if the numbers are right, but the analysis is wrong? When does intuition or procedure prevail over data analysis?

Take this from the Providence Journal,

The report explains the likely cause for this variation: It’s tough to trace voters. People die and people move, and those major life events are not reliably recorded. We can look at numbers like 770,000, 73.5%, and 748,000 and infer wrongdoing, even if there isn’t any. We need to realize that when we look at data sets that relate to humans we must be careful to consider that relevant variable, the subjective human, in our equations.

Overreliance on data takes too long

Research on decision-making provided by 122 advertising, digital, publishing, and software companies (industries characterized by uncertainty over outcomes) implies that under conditions of uncertainty, data-driven decision-making could be counter-productive. Gut feelings and simple processes frequently created a more favorable tradeoff in terms of accuracy and speed.

The explosion of open data and fast progress in data science allows us to know more about our businesses than ever before. Using data is often viewed as the gold standard in contemporary management. This information should produce better decision-making on each aspect of the market.

While the potential of big data is undeniable, is it the remedy for all decision-making situations? When could reliance on too much data backfire? Recent research from professors at King’s College in London examined when overreliance on data can lead to poor decisions.

In situations including severe uncertainty, data-driven decisions are not optimal. This explains why twelve publishers were incapable to understand the potential of Harry Potter and the Philosopher Stone before Bloomsbury Publishing published a small first-issue series of only 500 copies. The work was so creative that there was no earlier data possible to correctly evaluate its potential.

Researchers centered on innovation screening judgments in creative industries. In these decisions, managers have a dearth of data that would allow them to predict client feelings correctly, business potential, utility, and dangers.

Researchers invited supervisors to report how they made successful decisions. The researcher’s questions asked the degree that they relied on data, instinct, and process. Those processes included “majority” (choosing what the most people wanted), “tallying” (picking the choice with the greatest quantity of positive points), and “experience” (picking the selection that the most experienced individual on the team wanted).

The results showed that most managers followed a process (tallying) more than any data. The research illustrated that relying on data is unhelpful when speed is important. Managers who relied on their instincts together with some simple processes produced choices that were just as reliable but moved much more quickly. Processes and gut feelings suggested a more desirable tradeoff in terms of decision-making speed and accuracy.

When it comes to intuitive decision-making, specialists make better gut decisions. So managers with limited expertise should avoid dependence on intuition. Results from the study show that relying mainly on the process is a strong choice.

Data may not be the best choice when you need to decide in the next ambiguous situation. Following your instincts, together with some simple processes, can lead to faster and reliable decisions particularly for those with the important expertise.