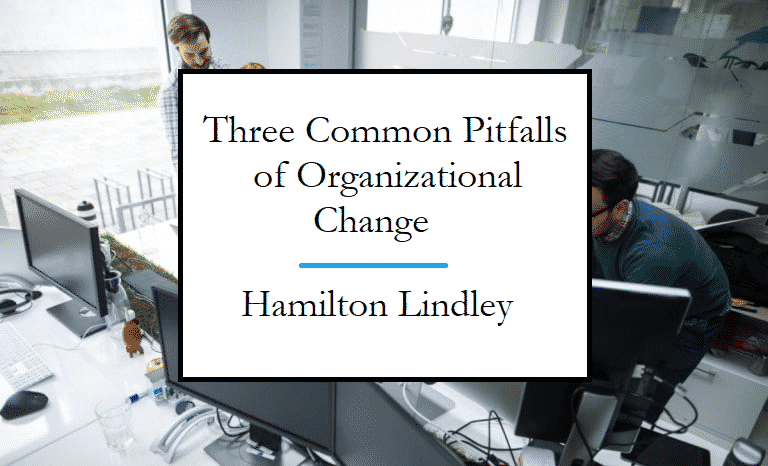 When trying to build lasting transformation for a company, many company executives choose the same comfortable systems that miss the mark. So 70% of company-wide transformations fail. Three common pitfalls plague executives executing change. First, they underestimate how difficult meaningful change is to achieve. Second, executives are unrealistic about the company’s capacity to implement change. And third, executives must ensure that their workers know why the transformation is important. If your major change is stuck in a ditch, examining these three areas will help you emerge from the trenches.

“We’ve done all things necessary to keep this transformation on track. We relentlessly communicated, had town halls for engagement, and implemented more than nearly 30 activities to promote the vision. But we are just hamsters on the wheel. There is no calculable improvement, doubt is setting in as employees are awash in projects that feel trivial, and we missed the mark of the vision for why we started this course in the beginning.”

Transformational change reaches the whole company. For that financial service company, shifting from product to service meant that all aspects of the business were affected. That company’s leaders assumed that a larger volume of initiatives would create transformation. Because of the high number of strategies, the efforts were uncoordinated, the project managers lacked authority to make decisions, and they were under-resourced. That system created an overload of different exercises that destroyed worker’s morale.

Then the company held ornate town halls with one-way communication. That deepened the disconnect with management because it illustrated they failed to understand the under-resourced, competing, and poorly-led initiatives implemented for the goal. Workers were left thinking that the executives were all hat, no cattle. To implement real change, the company needed to properly integrate the strategies and align the means with the ends.

Transformational change must be appropriately integrated and resourced. All initiatives must be linked. Marketing needs to understand how operations deliver those new services. Shared services from corporate need to link with regional offices to customize the new services. The plan must be sequenced so that the organization can absorb it.

Those who deliver change still have day jobs. Executives tend not to calculate how their employees’ roles are impacted by implementing the change while still carrying out their responsibilities day-to-day. Countless executives initiate change only to get distracted by the next shiny object.

They make videos reminding people that the change is strategically important, instead of working on changes needed in their leadership. They have their communications department write articles with their name, and recklessly claim early success by mentioning quick development on exercises that don’t amount to actual change. That makes the planned transformation into a mere campaign.

That financial services company had 20 exquisitely designed videos starring many executives. It sent dozens of articles touting examples of early adopters of the new services. Two dozen transformational change leaders updated the organization on their diverse exercises in hundreds of emails. Less than 20% of the employees opened them.

Real transformational change begins with an honest admission that the work will be difficult. Executives must acknowledge the company’s amount of control and capacity. They must also understand that communicating change requires listening twice as much as telling. And the sponsoring executives must be the first to change.

For the financial services company, executives had to end strategies that the company had neither the resources nor capacity to implement. Then, they launched listening groups where leaders were only authorized to ask questions. They were instructed not to get defensive while hearing employees talk about the disorder they created.

They identified features of the employee’s roles that could be paused to redeploy their time towards transformation instead. They put leaders on development and coaching plans to improve their leadership skills. At company-wide meetings, executives acknowledged how they miscalculated capabilities and what they were doing to improve. That confession provided credibility as the employees could saw that executives had skin in the game. Public promises to change are a mark of a leader’s integrity.

Misjudging how others see you

Leaders who let others know why and how the change is personal to them are more successful because it answers the unspoken questions that the workforce has about changes. Employees who don’t hear those answers often believe the changes are just to advance the leader’s career. And since the change involves sacrifices from the workforce, employees become cynical. If executives want only the personal profits with none of the personal cost, employees will not be committed to the project.

With the financial services company, the transformation was invented by an executive who entered the company as head of strategy. She came from another financial services business that neglected to make the identical journey to services instead of products. She understood the industry was turning. That sea change would leave behind that the businesses that neglected to stay ahead of the market. She also knew that if she could win at that change, she would be well-positioned as a successor to the CEO. She feared workers would believe she was only there for the CEO role. So she overcorrected by depersonalizing the transformation plans. Employees concluded was that she was only at the company for the short-term stock rise. They thought she would eventually give up, cash out, and move on.

By telling her story of past failure and desire to stay at the company long term, she was placed in a trustworthy light. It showed her deep individual convictions. She expressed passion for the change in companywide meetings. She revealed why she thought the company could be successful. She acknowledged her insecurity about being new to the company and wanting to be accepted. By sharing her vulnerabilities, she changed the perception. She encouraged others to see how transformational change was good for everyone.

If you’re in the middle of or about to begin an important transformation, I imagine you have a taste of how difficult it will be. The unexpected obstacles you’ll meet will test your persistence and confidence. Do the significant work to develop your company and yourself for the ride. The one obstacle you can best stop from wrecking transformation is yourself.