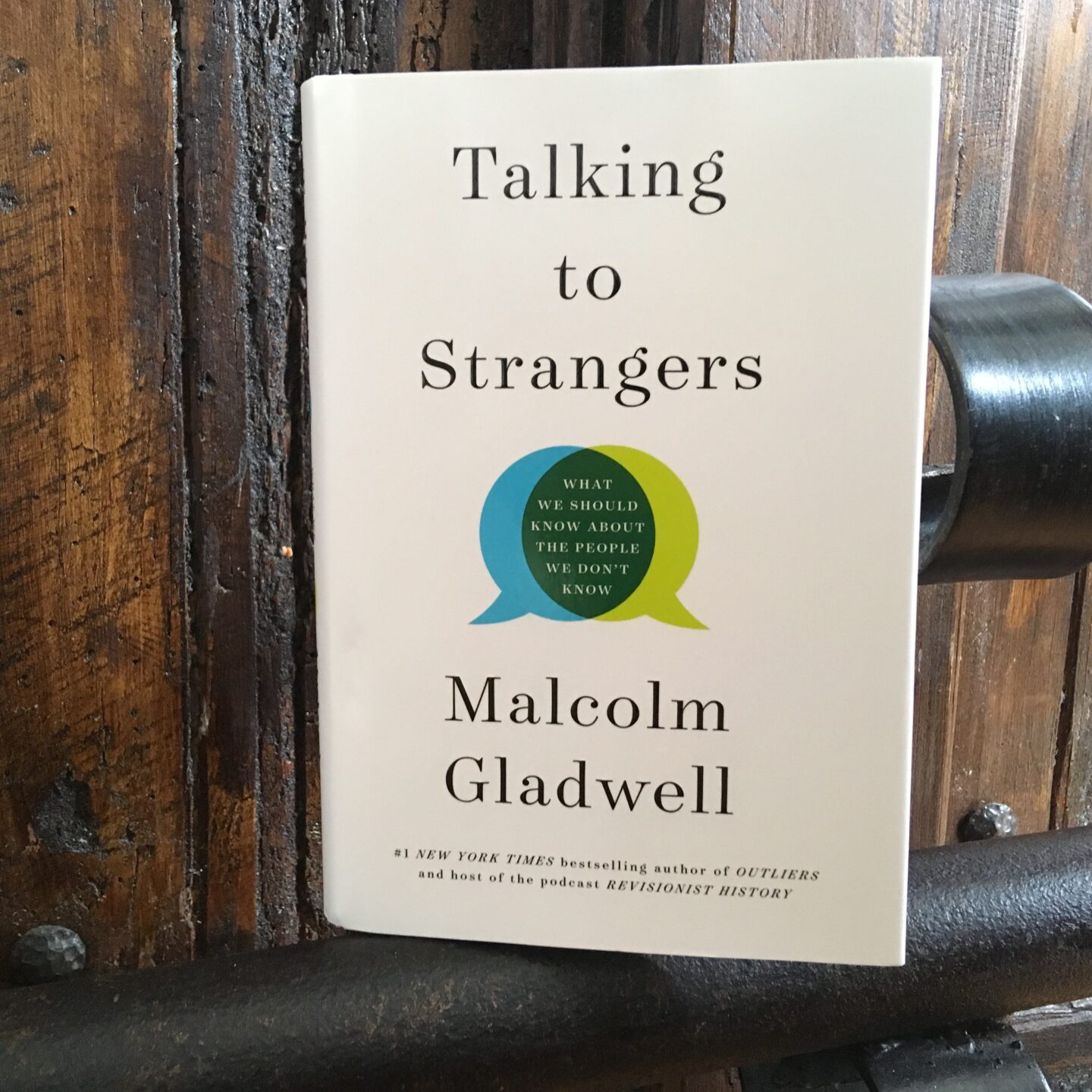 Talking to Strangers is about how our assumptions on strangers are usually wrong. The book details how the highly-trained CIA officers can’t spot double agents and diplomats can’t understand their opponents. Judges who see the defendants are worse at spotting recidivism than computer algorithms.

We are awful at understanding strangers, even when we have a lot of experience evaluating people. Using history and current events, this book shows how we try to understand the words and intentions of strangers. We learn where the techniques originated, and why they ultimately fail. The author stresses that we should approach strangers with caution and humility.

This book will attempt to solve two key puzzles concerning communicating with strangers.

1. Why can’t we tell when a stranger is lying to us?

2. Why can seeing a stranger face-to-face sometimes make it more difficult to understand that person than not meeting them at all?

The key issue with both problems is that individuals believe they can make sense of others using very easy procedures. When it comes to strangers, though, nothing is as straightforward as it appears.

These three tactics all fail in the end because they are based on the idea that simple signals are adequate proof of a stranger’s thoughts. We’ll take a look at each of these methods individually to discover where they come from and why they frequently result in poor encounters with strangers.

Truth as a Default

Truth-Default Theory is the idea that we assume people are telling us the truth. Scientists brought students to their lab for a trivia exam with a cash reward. The students were assigned a partner. But that partner was an undercover participant in the research. The partner encourages the participant to cheat when the examiner leaves the room with the test answers on the table.

After finishing the exam, the students are asked whether they cheated. People who examine the film of the students being questioned correctly identify the lies only 54% of the time. It’s a bit better than a coin flip. And experience doesn’t mean people fare any better. Law enforcement officials with an average of 15 years experience scored the lowest.

This is an example of the “truth-default theory.” We all tend to presume the truth. The only time we suspect they’re not telling us the truth is if there are a sufficient number of triggers that cause us to question what they’re doing. But assuming people are always lying is worse. We will inevitably be wrong and lose credibility.

We default to the truth because we must trust everyone around us for our society to function. For example, parents need to trust that they can drop their child off at soccer practice and trust the person in charge. We do not need to identify lies as much as we need to have efficient communication and trusting social encounters.

Humans struggle with transparency. We believe that the way someone acts gives an authentic window into how they feel on the inside. The main reason that meeting a stranger face-to-face sometimes makes that person harder to understand is that we believe a stranger will be transparent—that he will present himself outwardly in a way that accurately represents his inner feelings. But that is not usually the case. Humans are not transparent—it’s all a myth.

An American college student was killed in the tiny Italian town of Perugia. Amanda Knox, the student’s roommate, discovered her dead. Knox summoned the cops to the scene. Knox was eventually found guilty of the murder.

What doesn’t make sense is why Amanda Knox was convicted, or even suspected of being guilty. No physical evidence or motivation connected

Knox to the crime. The most basic explanation for what went wrong in Amanda Knox’s case is that the police expected Knox to act a certain way, but she didn’t. They interpreted her as being transparent. Her tale illustrates the risks of trusting that a stranger’s appearance is a trustworthy reflection of how she feels.

Amanda Knox was not guilty. But the way she acted in the months following the incident made her appear guilty. Here are a few examples of Amanda Knox’s behavior following Meredith Kercher’s murder:

So Amanda Knox spent four years in prison (and another four waiting to be proven formally innocent) for the crime of being odd.

We’ve all managed to put on a poker face. We mask the emotions we’re experiencing on the inside. But we think strangers will be the opposite. We think that we’re good at is understanding the transparency of people’s emotions. But in reality, it’s much more nuanced than we believe. We need to stop pretending to know how a person feels on the inside.

Coupling is the idea that behaviors are linked to very specific circumstances and conditions. We tend to believe in the idea of displacement instead of coupling. Displacement is the idea that our behaviors don’t vary from one place to the next. For example, if someone wants to kill themselves they will find a way. If someone wants to commit a crime, they will do it anywhere. But Talking to Strangers shows that’s not the case.

Once you realize that some actions are linked to extremely specific circumstances, you’ll see that where and when your contact takes place has a strong impact on a stranger’s conduct. Then you’ll be able to identify the whole range of complexity and ambiguity in the individuals you meet.

In the early 1990s, the Kansas City Police Department began to research ways to deploy additional police officers to reduce crime in the city. They hired criminologist Lawrence Sherman and granted him complete authority over the agency. Sherman was certain that the city’s high level of violence and crime was linked to the city’s large amount of guns. As a result, he chose to focus his experiment particularly on weapons in Kansas City’s 144th police district, one of the city’s most violent districts.

Sherman sent four policemen in two cars to monitor District 144 at night to focus on the linked behaviors of gun ownership and crime. He directed these four policemen to keep an eye out for any suspicious-looking drivers and stop them. Officers were instructed to search as many automobiles as possible that met the criteria and confiscate as many guns as feasible. These cops were essentially looking for a needle in a haystack. The final aim was to locate a firearm or narcotics. Sherman’s four officers received specific training and exclusively operated in District 144 at night—Sherman wanted to make sure that they knew how to target the right kind of traffic stops, in the right kind of locations, at the right times, that led to the right kind of searches.

Gun crime in Kansas City’s District 144 was slashed in half. The experiment was effective because it concentrated crime-fighting strategies—it targeted one component of the linked behavior (weapons) to avoid the other aspect of the coupled behavior (drugs) (crime).

Brian Encina pulled over Sandra Bland for failing to indicate a lane change. She was a college professor who was moving to town from Chicago. Bland said that she spotted Encina approaching her and just changed lanes to avoid him.

Encina asked her what was wrong. And she explained that the reason she changed lanes was out of courtesy to Encina because he was behind her. After she explained herself Encina sarcastically asked, “Are you done?” This triggered additional provocation from Bland. She smoked a cigarette in an attempt to relax. She was starting over in a new town and anxious about another ticket, as she owed about $8,000 in traffic tickets. Encina requested that Bland put out the cigarette. But Bland refused. She had every right to smoke in her own vehicle. Encina then began to pull her out of her car, he tackled her. Encina requested assistance, and Bland was arrested. Bland died in police custody three days later, apparently by suicide.

So, what are the takeaways from this? Officers should be more patient? No, it’s far more complicated than that.

Encina couldn’t read Bland. But he thought he had her figured out. What he mistook for transparency was a misunderstanding. Encina misunderstood Bland and condemned her for his conduct. Encina made an assumption about a stranger, which is something we all do daily. It’s critical to realize that we can’t understand strangers and should quit pretending we can. Would Sandra Bland be alive today if Encina approached her with humility and caution?

The Most Important Takeaways from Talking to Strangers

We have no option but to engage with strangers. But we are incapable of making sense of the strangers we encounter. So, what are the answers? Stop punishing people for having a natural tendency to assume the truth. Recognize that there is no ideal approach for reading a stranger’s thoughts and intentions. When chatting to a stranger, be cautious and humble. We must learn not to blame the stranger when an encounter goes wrong, but to look into how our own intuitions might have played a part.

This book earns a strong five out of five hammers. Malcolm Gladwell’s storytelling is compelling and memorable.