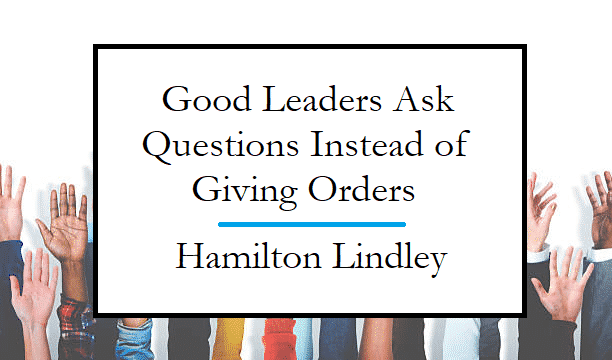 One of the earliest influential management consultants argued that managers should supervise employees because workers “shall be so stupid and phlegmatic that he more nearly resembles an ox than any other type.” Regrettably, many managers continue that failing approach.

When coworkers ask you for guidance, do you ask them questions? Or do you give them direct orders? Telling people what to do doesn’t normally work. First, you may not even be solving the right problem. You don’t have the insight of those experiencing the puzzle. Second, people may not be fully committed to your idea. When we don’t have ownership of ideas, it’s easy to blame others, claiming it was someone else’s idea all along. If you’re the boss, you will assume your advice was good, but your team’s execution was poor. So then you begin a cycle of micromanagement. That makes nobody better.

So instead of pontificating, ask questions. I’ve found that these three work best to curate a compelling culture of innovation.

What do you recommend?

Once your workers are used to this question, they will come to you ready to discuss ideas. Some of the most useful ideas come from the frontline workers closest to customers. These people understand customer frustrations, technology opportunities, and operating realities.

How can we test that?

Once you’ve brainstormed about the idea, testing it will allow you to see how the idea works with minimal risk. Even if you’re skeptical of the idea, let your team see it for themselves instead of fighting it. You will be surprised. Ideas that sound valid don’t constantly work as expected. Testing offers healthy surprises, and, with purposeful practice, we get better.

What do you need from me?

As a leader, you should be working to accelerate the work of your team. Ask them to consider the obstacles they may face and how you could help them. They may need money, resources, or access to others with a certain skillset. Instead of inspecting or impeding your team’s work, you can help remove the barriers to their success.

Most successful startups are launched by people who had their idea at a former employer. Companies end up paying millions to buy those companies that they could have had themselves if they just listened to employees. Research shows that when companies develop employees, they are more productive.

Your treatment of employees goes beyond profit. Create a workplace where workers are encouraged to exercise their creative passion. Making bad jobs good starts with three straightforward questions.